The test apparatus comprises a horizontally disposed beam, which is pivoted about its centre point. A short length of steel wire, 1 mm in diameter and bent into a U-shape, the base of the U being straight, is rigidly attached, at both ends, to one end of the beam, so that the straight part projects below the beam and is parallel to the axis of the beam pivot.

The plug is held by a suitable clamp in such a position that the straight part of the steel wire rests on the plug pin, perpendicular to it. The pin slopes downwards at an angle of 10° to the horizontal.

The beam is loaded so that the wire exerts a force of 4 N on the pin.

1 carrier, stroke 9±0,2 mm, with support for clamping the specimens with plug pin inclined 10° to the horizontal,

1 eccentric driver unit with geared motor, for 30-5 movements of the carrier per minute,

1 beam, with scraping head, including holding device for the steel wire, with adjustable counterweight,

1 eccentric for lifting the scraping head.

Model ZLT-CTZ2, as type ZLT-CTZ1, but for 2 samples, with 2 weights, 2 beams and 2 carriers with specimen supports. 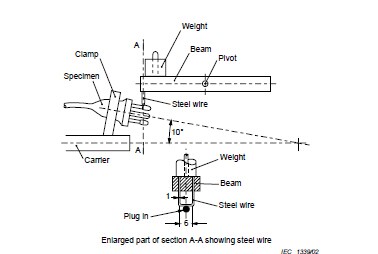 Model ZLT-CTZ2, as type ZLT-CTZ1, but for 2 samples, with 2 weights, 2 beams and 2 carriers with specimen supports.